Long ago, even before the advent of Islam, earlier civilizations used the gold and silver coins by weight as money. These bimetallic coins facilitated trades and exchange of commodities among communities, regions, tribes and even continents as gold and silver were universally accepted medium of exchange. The advent of Islam also supports the usage of these coins as money. The standardized Islamic version is called Dinar and Dirham. The initial Dinar coins used by the Muslims were minted by the Byzantine Romans (which were called the Solidus) and initial Dirham coins were minted by the Sasanians (which were called Drachm). 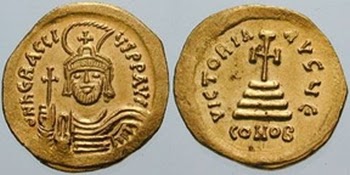 Even after establishing the first Islamic state in CE 622, the Muslims did not institute a coinage of their own. This remained true for Arabia through the end of the Orthodox Caliphate and the early part of the Umayyad rule.

During the early years of their reign, the Umayyads continued to use silver Sasanian coins in Iran and Iraq, and gold and copper Byzantine coins in Syria and Egypt.

At first these Dirhams didn't differ much from the Sasanian coins they copied, but by the third decade of Islam, marginal writings started appearing on these Dirhams [Bism Allah] leading eventually to the replacement of the pahlavi script and the Yesdigrid era dating with Arabic script and Hijri Dating.

These Dirhams were replaced by purely epigraphic Dirhams in the reform of 'Abd al-Malik Bin Marwan. Following is the translation of Ibn al-Athir's account of the coinage reform and its reasons.

As part of his policy to unify the various regions under Islamic rule, Abd al-Malik ibn Marwan (685-705CE) introduced the first Umayyad gold coins at a time of discord between the Umayyads and Byzantines over the merits of Islam and Christianity. The early coins were struck either in 691 or 692; the Byzantine emperor was angry and refused to accept the new Arab gold currency, renewing the war between the Arabs and the Byzantines.

The new Islamic currency that was first coin to carry an Arabic inscription was called a dinar and was similar, in both size and weight, to the Byzantine solidus. On the obverse, there were three standing figures of unknown identities, as on the Byzantine coin, which had on its obverse the figures of Heracles, Heraclias Constantine, and Heraclonas; on the reverse, the Byzantine cross was replaced by a column placed on three steps topped with a sphere. In the margin surrounding the design the testimony of Islam was written in Arabic: "In the name of Allah, there is no deity but Allah; He is One; Muhammad is the messenger of Allah." 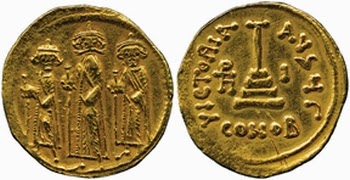 The new Arab-Byzantine coin stressed the unity of God to counter the Christian Trinitarian doctrine, and made no mention of the caliph.

The Byzantine emperor Justinian II responded to this challenge by striking a new solidus with the head of Christ on the obverse and on the reverse an image of himself robed and holding a cross.

Caliph Abd al-Malik's response was to issue a new dinar in 693.

On its obverse was the upright figure of the caliph, wearing an Arab headdress and holding a sword, with the testimony of Islam inscribed in the margin. The reverse bore the same column on three steps and the sphere, but a new legend appeared around the margin: "In the name of God this dinar was struck in the year four and seventy" Only eight of these early Arab-Byzantine dinars, dated according to the new Islamic calendar, have survived. Once more, the Byzantine emperor Leontius responded by striking a new coin similar to that of the Arabs, which greatly displeased Abd al-Malik. 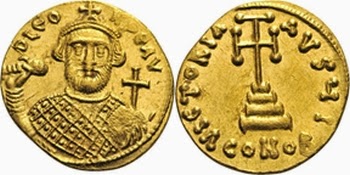 In 697 the caliph decided to abandon all traces of iconography and introduced the first Islamic coin devoid of figurative representation. 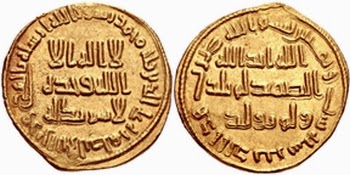 On both sides of the new dinar were inscribed verses from the Qur'an, expressing the message of Islam and making each piece an individual missionary of the faith. After he introduced this coin, Abd al-Malik issued a decree making it the only currency to be used throughout Umayyad lands. All remaining Byzantine and Arab-Byzantine pieces were to be handed to the treasury, to be melted down and re-struck. Those who did not comply faced the death penalty. The new gold dinars weighed a bit less than the solidus and the state controlled the accuracy of its weight along with the purity of the gold. 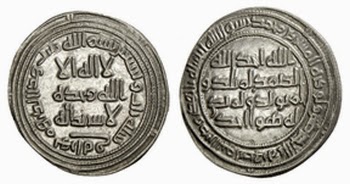 The Gold Dinars and Silver Dirhams with Qur’anic verses remain legal tenders during various caliphates and kingdoms till 1920CE (Alim Khan of Bukhara).

Recently many attempts have been made to revive this Islamic currency of Dinars and Dirhams. The countries minting these coins are as follows;

Malaysia
Kelantan was the first state in the country to introduce the dinar in 2006, which was locally minted. In 2010, it issued new coins, including the dirham, minted in United Arab Emirates by World Islamic Mint.

The state of Perak followed suit, minting its own dinar and dirham, which was launched in 2011.

Other countries are also minting Gold Dinars and Silver Dirhams including UAE, USA, Australia etc but are not used as legal tenders in the country. 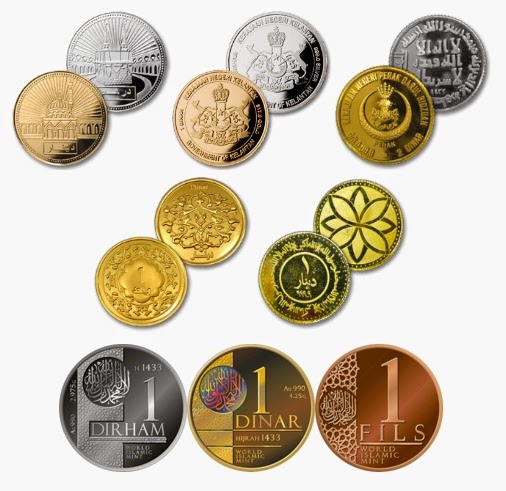 Posted by Iftikhar Ahmad at 2:33 PM

I think that thanks for the valuabe information and insights you have so provided here. where can i sell my coins

Great article I like it.No matter who says whatever.. but this for me is very helpful knowledge. Nice piece of writing, thanks for this.
Plz visit my site: https://newslink.pk/currency-converter/AED-to-PKR/

Long ago, even before the advent of Islam, earlier civilizations used the gold and silver coins by weight as money. These bimetallic coins ...